One more case for the road! meet the "dative" case — the laziest of all the cases! 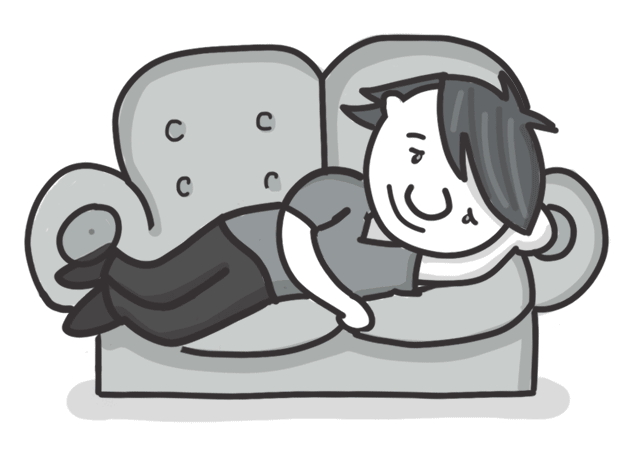 A quick note: If you haven’t already checked out the previous lesson on the nominative case and the accusative case, start there. (You’ll want to tackle that first.)

After that, you’ll be ready to dig into the dative case!

More parts of a sentence

In the last lesson we introduced you to these parts of a sentence:

To understand the dative case, we need to add one more part:

What on earth do we mean by that? Here are a few sentences to illustrate what we mean by "just handing out doing nothing":

Okay, now you try a few. Take a look at the example sentence. Identify the subject, action, direct object, and indirect object. Then click the sentence to see if you were right!

Great! Now that you can identify direct and indirect objects, let’s talk about the dative case.

Well here's the third piece of the puzzle: If there is an indirect object in a sentence, it needs to be in the dative case.

Nominative
the man
Accusative
a book
Dative
the children
MEMORY TRICK: Remember how indirect objects just kind of passively hang out in the sentence while something else or someone else does all the work?

It might help to remember this case as the Lazy Dative. 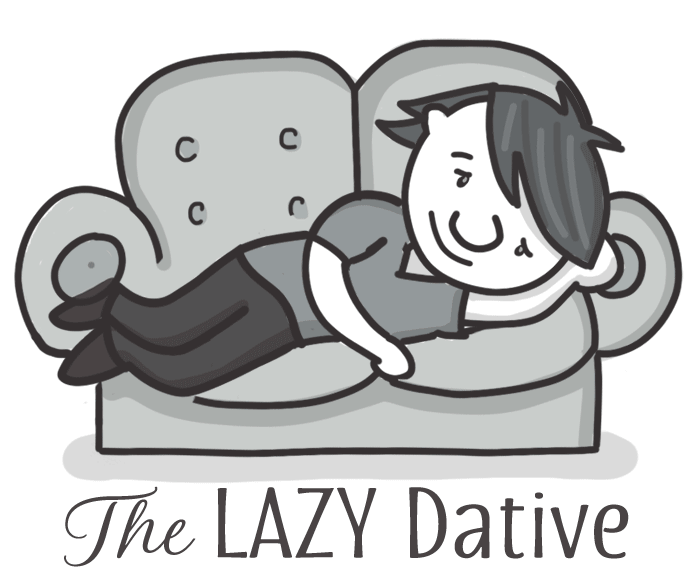 Now take a deep breath, it's about to get crazy

So what does the dative case even look like?

Remember, we show the “case” of a noun in German usually by changing the “little words” which appear in front of the noun, such as der/die/das.

Take a look at the words for “the” we use in the dative case:

You probably remember that the nominative and accusative cases were very similar. The only word that changed in the chart was the masculine. Easy peasy.

But in the dative case, ALL the words change. That means we have more to memorize. Boooo.

Plus there's an extra quirky rule for plurals:

Plural nouns in the dative case: Gimme an -n!

As if things weren't tricky enough already, if you have a plural noun, and it belongs in the dative case (because it’s the indirect object), you have to add “n” to the end of the noun (unless the word already ends in an “n” or an “s”).

Let's look at the plural word "children" (die Kinder) as an example.

If children is the subject of the sentence (nominative), we use the word die.

If children is the direct object (accusative case), it stays die:

But, if children is the indirect object... BOOM, it changes! Not only does die become den, but we also have to add an “n” to the word because it did not end in –n or –s.

(Remember that the children are the indirect object in this sentence, because they're just passively receiving the book. The man is doing the action, the book is the thing being given, and those kids are getting the book without having to do any work. They're the lazy datives in this sentence.)

Let's give it a whirl: Example sentences with the dative case

Right. Let's put all that together and see how it plays out in a sentence.

Intermission: You're right — this is hard.

I want to take a little pause here just to offer some reassurance.

Don't feel bad if you find this really hard to wrap your head around. It’s one of the hardest parts of learning German and even the best students need a lot of practice.

It feels like you've gone to a dinner party, learned who everyone is, and then everyone decides to switch names just to mess with you. Arrrgh!

It helps if you start listening to German conversations and reading German stories. It's one of those things where the more you see it, the more it will start to make sense. But also just expect it to take some time to sink in, and don't beat yourself up if you don't "get" it straight away.

Unfortunately, it's not really possible to just put German "cases" on the too hard pile and ignore them. If you do, you run the real risk of saying some odd things, like:

It's worth taking the time to knuckle down and memorize the tables. Make yourself some flash cards. You'll get there!

The dative case isn't just used for indirect objects (or the things passively receiving something, or just hanging out lazily in a sentence).

There are other places it pops up in the German language.

Just like we saw when we talked about the accusative case, there are some connecting words (prepositions) that always indicate that the dative needs to be used for the next thing in the sentence.

(Switzerland is feminine — die Schweiz changes to der Schweiz.)
Play
außer
(except for)

(Man is masculine — der Mann changes to dem Mann.)
Play
bei
(with / by)

Play
seit
(since / for)
Play
Wir kennen uns schon seit der Konferenz.
We've known each other since the conference.

If you're having trouble remembering these dative prepositions, here's a video with a little ditty that will help. (Trust me!)