Attack of the German sounds and symbols!

How to pronounce German words — how to say those ä, ö, ü symbols and that weird ß thing 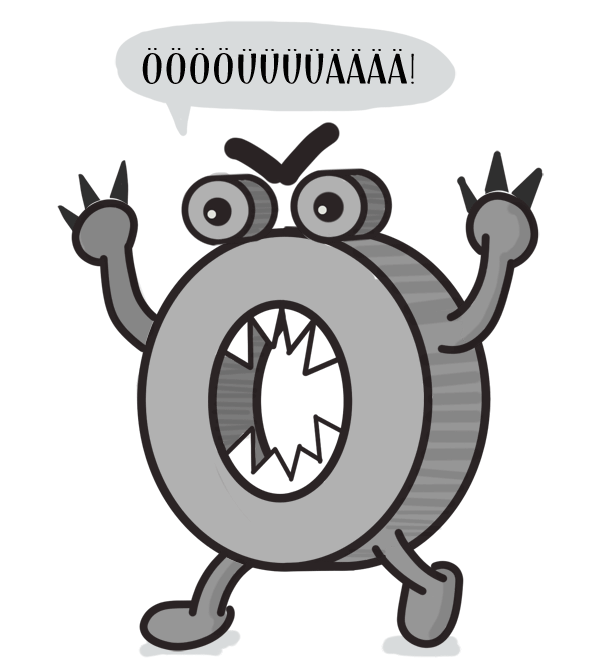 Some people might say that German is not the world's love language. Jens doesn’t agree — he’s never had a problem impressing the ladies with words like these:

But don’t be scared. Jens has the perfect way to help you navigate all those ß’s, ö’s, and ü’s.

It's time to play — What's that sound?

To introduce you to German sounds, Jens invented a game. Listen to the audio clip and decide if Jens making the sound for a German letter or making some other noise.

Is Jens making the German "r" sound, or is he gurgling mouthwash?

Play Have a listen

Answer: That was Jens making the German r sound. When the letter r appears at the beginning of a word, it makes a rolling sound way in the back of your throat. Give it a try. Make an r sound, then pretend you are gurgling while you do it.

To make you feel better, that crazy, rolling r sound only happens when the r is at the beginning of the word. Everywhere else, the r makes a much softer sound, almost like an “uh” sound.

Is this some audio of Jens yodelling, or Jens making the German "b" sound?

Answer: That was Jens yodelling. The good news is that b makes the same sound in both English and German. In fact, there are lots of letters that make the same sound in German and English: f, h, k, l, m, n, p, t.

Answer: That was the oh-so-lovely sound for the German ch. Try it now by making a very short, cat-hissing sound.

Play
Ich
I
Play
mich
my

Is this Jens making the sound for that goofy German ß symbol? Or is it a snake about to attack?

Play Which one is it?

Answer: Don’t let that weird “ß” symbol upset you. It’s called an eszet. It’s just an “s” sound, “ssss.” In fact, Jens and other Germans are fighting to eliminate the eszet and replace it with a double-s (ss) as part of a spelling reform movement.

Here's a tricky one for you. Is this Jens saying the German w sound, or is it Jens's car refusing to start?

Play Listen and decide (and don't peek at the answer!)

Answer: That was the German w, which sounds like our “v” sound. (Now you know why when comedians do impressions of Germans, they always replace all their w’s with v’s. I must vash my hands vith varm vater.)

You’re definitely going to need to master this sound because almost all German question words begin with w’s.

Play
Was?
What?
Play
Wann?
When?
Play
Wo?
Where?

Is this Jens saying the German "v" sound, or the wind blowing?

Play What do you think?

Answer: That may have sounded like wind, but that was the sound the letter v makes in German. It’s the same sound as our English f.

Answer: That was the German "j" sound, pronounced like an English “y” sound. Here are some German words with this sound.

Got all that? Here's a quick recap:

Umlauts: Your mouth is about to do some crazy gymnastics

Germans also have a few vowels that we don’t have in English: ä, ö, and ü.

The double dots above vowels are called umlauts. They change the sound of the vowel to something that sounds like you’re getting dental work done while trying to speak

When you first start learning German, as an English speaker, you are going to want to keep following our rules for silent letters. But the Germans prefer for their letters to make noise.

Here are some places where you might get tripped up. Remember to listen to Jens pronounce the example words. Resist the urge to stay silent!

kn
Play
Knoblauch
garlic
Rule: say both sounds. (In English, we keep the k silent, but not in German!)
e at the end of a word
Play
Lampe
lamp
Play
Katze
cat
Rule: In German, there is no such thing as a silent -e at the end of a word. So when you see an e hanging out at the end, it makes an “eh” sound.
ps
Play
Psychiater psychiatrist
Rule: Pronounce both letters.
pf
Play
Pfeffer
pepper
Rule: Seriously, pronounce both letters, even if it sounds weird.